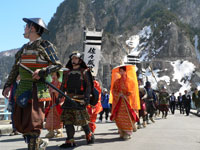 After closing for winter, the Alpine Route re-opens in April. The opening is celebrated with events such as the opening ceremony and re-creations of armies and stories from the 16th century warring states period on the backdrop of the snowy Japan Alps. 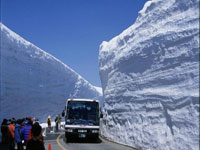 Snow removal on the highland road and Murodo, in preparation for the complete route opening date, produces snow walls that can exceed 10 meters in height. For a limited time, from mid-April to late June, walking in the snow corridor and looking up at the high walls is a popular activity. The snow walls gradually lower as the snow melts but can still be seen from the Highland Bus until around late June. 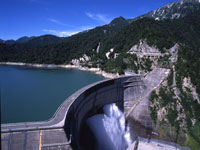 The water discharge from this world-class large dam is a popular attraction from June 26 to October 15. Water gushes out of the dam at a rate of 10 tons per second creating a fine mist and beautiful rainbows on sunny days. The power of the discharge can be seen up close from the new observation deck. 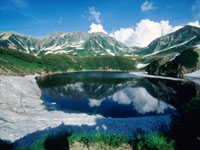 From the Murodo Terminal, a 10 minute-walk on a trail leads to the vista of Mikurigaike (pond) filled with snow-melted water in vivid blue, which reflects the highest peak (3,003 m) of Tateyama Mountain Range. The area is covered with a wealth of blooming alpine plants. 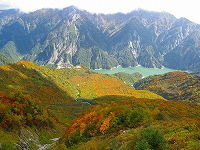 The fall foliage is visible for about a month and a half, moving from the summit of the mountain to the foot between late September and early November. Among the most beautiful places to see the fall foliage is the Tanbodaira area viewed from the Tateyama Ropeway. The sight of the carpet of golden leaves in early October is a masterpiece. 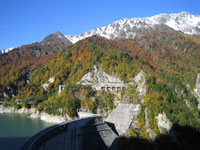 The contrast of fall foliage and snow on Tateyama is beautiful. The fall foliage can be seen at Kurobe Dam from mid-October. 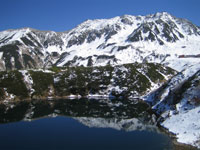 When November comes, the first snows chase the fall foliage from summit to foot. Soft fresh snow envelops the landscape and Tateyama is plunged into silence once more. 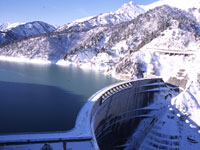 Business for the fiscal year draws to a close on November 30. The Alpine Route is shrouded in snow. 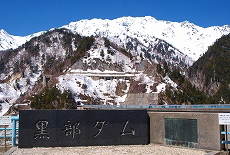