What kinds of vehicle will you ride?

The Alpine Route is not accessible to private vehicles. The variety of vehicles is part of the fun of traveling the route. Here, we will introduce some of them for you. 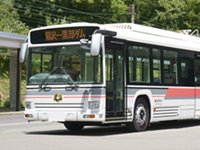 The long Kanden tunnel was built in the process of constructing the dam. Its construction was documented in a novel and movie that were popular in their day. The area that the tunnel runs through is designated as a National Park, so the buses that carry passengers through the tunnel run on electricity. This trip, from Ogisawa to Kurobe Dam, takes 16 minutes. 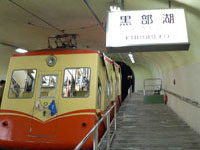 The Kurobe Cable Car runs through a tunnel in order to provide shelter from the snow and limit its impact on the landscapes. With even its stations underground, it is the only fully underground cable car in Japan. The cable car runs the 0.8 km between Kurobe Dam and Kurobedaira in 5 minutes. 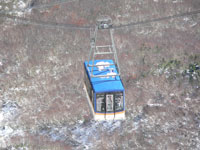 In the same spirit of landscape preservation as the cable car, the Tateyama Ropeway designed with no support pylons along its length. This also allows it to provide some of the most enjoyable views along the Alpine Route. The Ropeway climbs 500 meters over its 1,702-meter span in around 7 minutes. 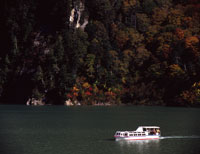 Cruising the snowmelt waters of Lake Kurobe, the “Garube” is the highest operating cruise ship in Japan. Enjoy views of Japan Alps including Mt. Tateyama beyond the magnificent Kurobe Gorge. The “Garube” is in operation from June 1st to November 11th, though operation may be suspended due to low water levels in the lake.